This is one of a series of articles from Ruth O’Leary. View some of Ruth’s work in the Gallery. 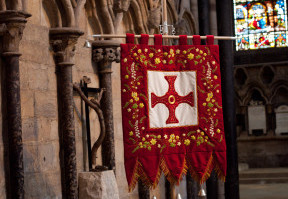 In 2012, I completed a commission to embroider and make St Cuthbert’s Banner, a processional banner to be presented to historic Durham Cathedral, in North East England. The Banner is entirely hand embroidered, and took over 800 hours to make.

A lost medieval banner dedicated to St Cuthbert was held at the Cathedral before being destroyed in the Reformation. A detailed description of this has survived from the Middle Ages, and local heritage body the Northumbrian Association resolved to commission the making of a new Banner based on this description for presentation to the shrine of St Cuthbert.

A team of local artists and craftspeople was assembled, and I was chosen for the prestigious task of hand-making the Banner itself.

As part of my work, I’ve used metal thread embroidery – goldwork – and created minutely detailed split stitch pictures. Both these techniques were integral to medieval Opus Anglicanum embroidery, from which the finest church textiles were made, so this experience and expertise were ideally suited to the work. However, while the new Banner was inspired by the lost one, it was not to be an imitation of it but an entirely new piece, using ancient techniques, skills and levels of craftsmanship. 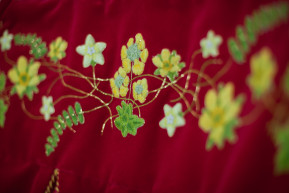 Intricately detailed local meadow flowers were worked using tiny split stitches, to give a naturalistic and contemporary look, with goldwork embellishment added for extra drama. Appliqué, another technique that features prominently in my work, was used to add a large Cross of St Cuthbert to central panels on both the front and back of the Banner, itself decorated with gold highlights, beadwork and appliquéd detail.

It was thrilling and exciting to be selected for such a high-profile commission and was a real pleasure to work with other talented craftspeople, and the enthusiasm of the Association and its members for this historically-sensitive project has been inspiring. It was a great honour to be chosen to embroider something which will be used in such an amazing setting for so many years to come.

St Cuthbert’s Banner was presented to Durham Cathedral on St Cuthbert’s Day, 20 March 2012. The Banner was carried in procession by the project’s sponsor, John Cuthbert, through the streets of Durham to be received at the doors of the Cathedral itself before being dedicated to the saint.

It now hangs at the entrance of St Cuthbert’s shrine in the heart of Durham Cathedral, where it is available to view by visitors.

Includes a video, with an interview with Ruth

If you’re interested in finding out more about Ruth’s work or would like to discuss commissioning a piece of unique textile art, please get in touch.