The flower stems are quite flowing (well, most of them), so I’ve decided to start from the centre again and work out, to get the flow right.  This means beginning with the cowslips, which are actually the only flowers with straight stems.

To work the stems, I’m couching two strands of the same imitation Japanese gold thread that I used singly for the edging.  I want the colours to remain consistent, so the couching thread is the same green as whatever I used for the leaves or flower sepals.  As ever, though, the cowslips manage to make this more complicated than the other flowers.  The cups at the bases of the flowers are the palest shade of green I’ve used, Madeira 1409, while the leaves are a shade darker, 1410.  As the stems run from the flowers to the leaves, which one do I use?

Starting at the flower end, I couched the gold thread down with stitches quite close together, using the pale green thread:

I want to shade into the darker green as I go down, so I added a few stitches further and further apart, to about a third of the way down: 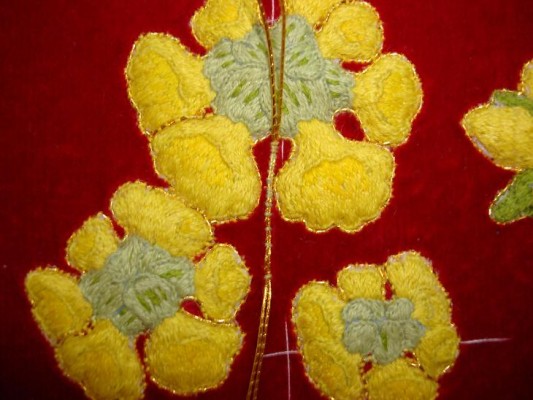 I then filled in the gaps and finished couching the gold thread with the darker of the two greens, so that they shade into each other: 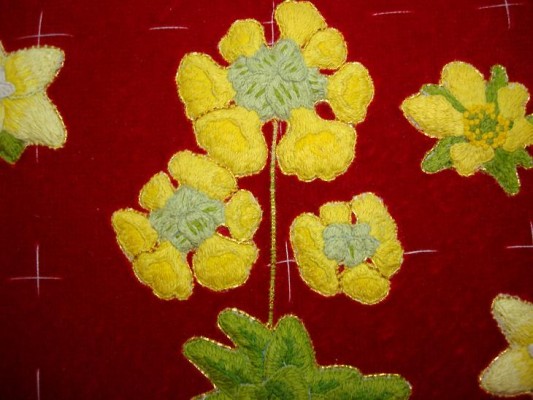 The other two stems are very short, so I just used the one colour, 1410, for them.

So here’s the cowslip, with it’s stems added: 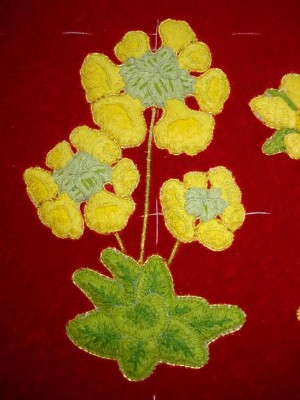 The rest of the stems on the design are curvy, wavy lines – I’ll start them next.