For no particular reason other than wanting to give it a go, I have decided to teach myself tambour beading. For anyone who hasn’t come across it before, this is a way of attaching beads or sequins to a fabric with a hook rather than a needle, and is meant to be both faster and more secure than stitching beads in place. For this reason, it’s commonly used in couture work – no-one wants an unbelievably expensive dress to be shedding beads half way down the catwalk!

It’s quite a niche technique and there’s less information available on it out there than on many other forms of embroidery; there are a few courses available which I have no doubt will be excellent, but my experiments are going to take a more do-it-yourself approach.

I first bought a tambour hook set, and then spent an afternoon watching videos on YouTube. The two most helpful ones I found were one by the ever-wonderful Mary Corbet on the basic tambour stitch, without the beads, and one on basic beading by Robert Haven. I also bought a French book on Broderie de Luneville (the same technique); this is entirely in French, but if you don’t read French but still want a copy don’t worry – the diagrams are excellent and very easy to follow without the text.

Tambour work is basically crochet through fabric. It uses a very fine hook, but the basic principle of creating a chain is exactly the same. I had a brief practice with the basic stitch without beads, and then another brief practice with beads, but this was a bit dull so I set up a simple project to work on, to make it a little more interesting to do.

I drew up a very simple design of ripples on a beach, that could be worked with Gutermann seed beads I already had: 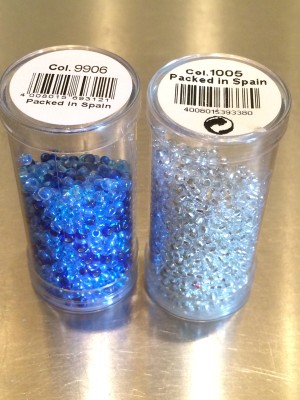 No photos as I couldn’t do this and fiddle with a camera at the same time, but tambour beading is worked from the back of the fabric. The beads are strung on the thread in advance (I just used ordinary sewing thread), then each individual bead is pushed into position and a stitch worked on the far side of it by pulling a loop of thread through the fabric with the hook, taking care not to snag the fabric itself, which is easier said than done.

This means that as you work, you see a line of chain stitch, not the beads, which are on the underside of the fabric as you work: 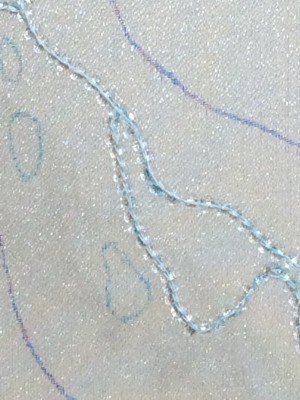 A close-up shows this a bit better: 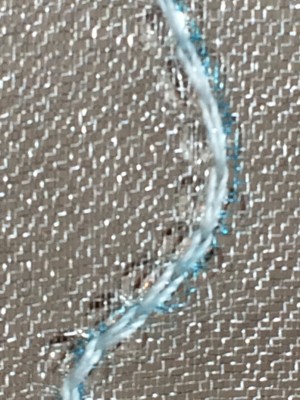 Close up of chain stitch worked with a tambour hook

And once the frame has been turned over, rows of beads: 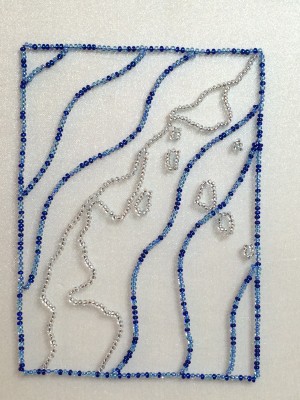 I’m quite pleased with that for a first go!

A couple of tips from my very limited experience: the fabric needs to be stretched very taut on a frame or the hook will snag it even worse than it’s probably going to anyway, and the frame needs to be supported on a stand of some kind as you’re going to need both hands free to do this. And try very hard not to drop a stitch or the whole lot will pull straight out and you’ll have to do it all again. That one is from painful personal experience!

My next experiment will be moving on from straight lines and trying to fill in a space.