Time to start adding the flowers!

I should just mention that while the finished panel will be vertical, it’s mounted horizontally on the frame, so the flowers in the photos will be sideways on.  I could turn the photos round, of course, but I thought it would be better if you see them them way I’m seeing them as I work.  With most of them it doesn’t really matter, but with some of them, it does look obvious.

Such as the cowslip.  Each panel has one in the centre, and it seems to be a good place to start, and then work outwards.  So, using my grid as a guide, I first added the bunch of leaves:

I’d meant to take a photo of each flower head as it went on, but I forgot, so I’m afraid you’re going to have to skip the interim stages and go straight to all three having been applied: 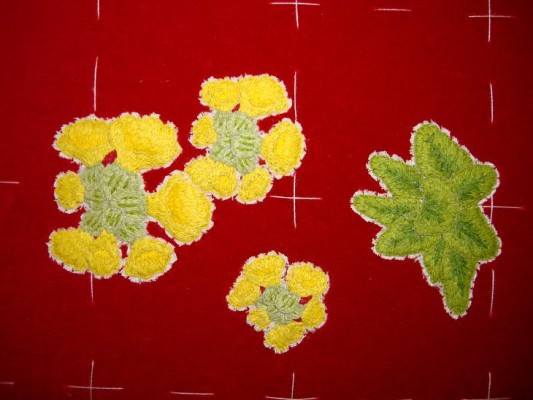 It’s a start, and applying the flowers is a lot quicker than stitching them in the first place!

For anyone who wasn’t reading when I reached this stage with the first panel – don’t worry that the cut edge of the linen around the applied pieces looks a bit rough.  Once all the flowers are in place, they’ll be edged with gold, and the linen edges will be concealed.

2 comments on “Applying the cowslip”