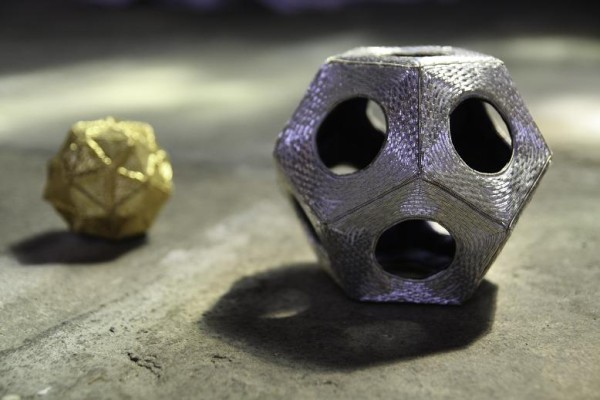 In the last post, I described basic goldwork couching. These two pieces, Dodecahedron I and Dodecahedron II, were both made using exactly that technique.

Dodecahedron I, the small gold one, is a geometrical solid with 12 five-sided faces, and is about the size of a tennis ball. For each one, I cut out a pentagon in yellow felt, stitched this to linen which was then stretched on an embroidery frame, and then gold passing thread (Jap gold, in this case) was couched onto it. I went round the edge of the felt shape first, then went in smaller and smaller in a spiral, until all the felt was covered.
When all 12 were done, I cut them out, leaving a margin of a bit less than an inch (about 1 cm), and then mounted each on a pentagon of card, folding the linen margin over the edge of the card. I then stitched these together to make the dodecahedron form. To hide the seams, I couched gold pearl purl wire over them.
Going back a step, if you look at it, it looks almost as though it has more than 12 faces. This is because on each one, I couched soft yellow string (proper goldwork string!) onto each piece of felt; on each one, I went from the centre of the pentagon to each point. When the string was couched over with the gold thread, it forms a five-pointed star. 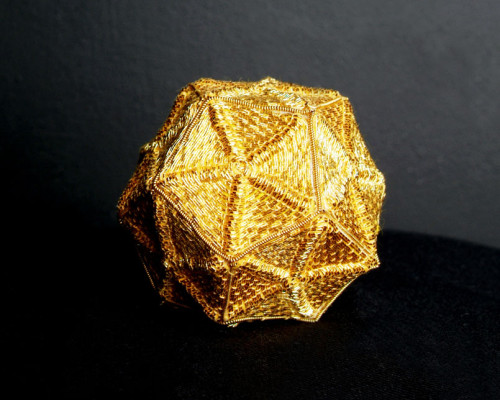 Dodecahedron II was made in the same basic way, though without the string, and with a circle cut out of the centre of each pentagon. This means that the interior is visible, so after each completed section had been mounted on card, I backed it with a slightly padded deep navy silk satin, to contrast with the silver thread. 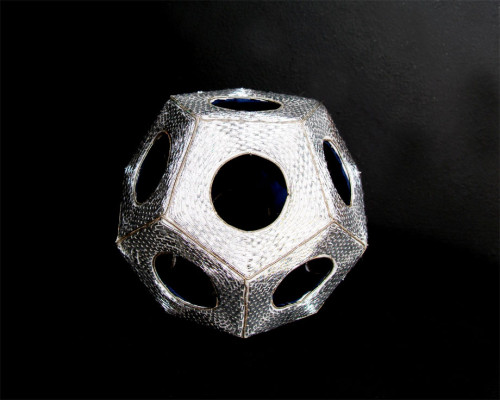 Couching is a very simple basic technique, but it can be used to quite eye-catching effect.
8 comments on “Dodecahedrons I and II”