So, I have a transfer of the design. Now what? I’ll get onto the fabric for the front of the banner in a moment, but right now you need to know that it’s going to be lined with a fine linen.  This won’t be seen, but acts to support and strengthen the top fabric.  It also comes in very handy as a means of transferring the design without risking getting marks on the top fabric that you don’t want.

The transfer is heat activated, and needs to be ironed on.  I stitched it transfer side down to a piece of linen cut to size: 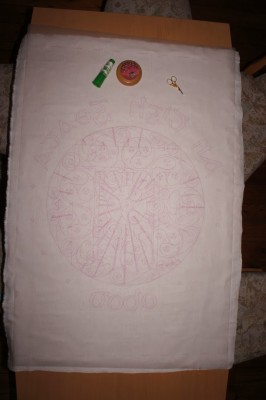 There’s always a danger when ironing it that the transfer might shift slightly, which can lead to smudging or double lines.  The larger the design the more likely this is to happen, and the more complex the design the more of a problem this is to work with later.  As this is both large and complex, I was very careful indeed with fastening the tracing paper to the linen, tacking it down in a grid pattern, with lines of stitching roughly 5 cm (2″) apart.

If you’re paying attention you’ll have spotted that as the traced side is face down, the text is now back to front.  Don’t worry, it’s meant to be like that!

After some very careful ironing, I took out all the tacking stitches and cautiously removed the paper: 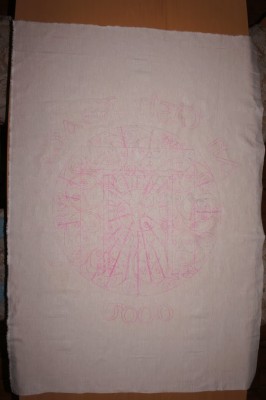 Fortunately, it’s fine, which was a relief!  It looks rather faint in the photo, and some areas were faint enough for me to go over them with a pencil to make them clearer, but in real life it’s going to be fine to work with.

The next step is to attach the linen to the top fabric, the one that’ll be seen.  Regulars will know I tend to work with silk, but in this case I didn’t think it was appropriate. I want the banner to be robust enough to be used in outdoor events, which in the UK will mean suitable for use in all weathers.  As such, I’ve chosen a cotton sateen, in jade green. This is still a natural fabric, is hard-wearing, has a nice sheen to it, and as it was often the fabric of choice for miners’ banners, traditionally paraded through the streets of mining communities in Northern England, should be able to stand a bit of rain.

This was also cut to size, tacked to the linen, and using an overlocker, the edges were neatened and the two pieces of fabric joined together: 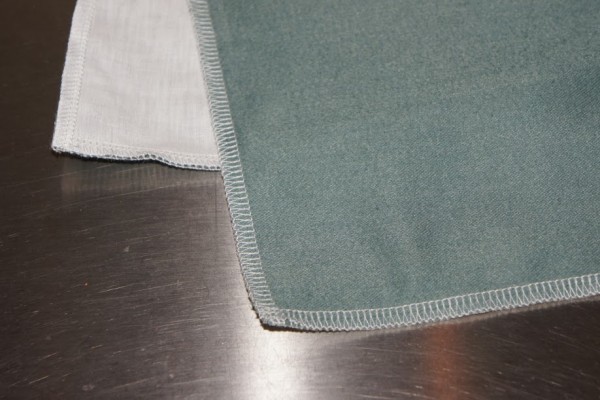 (I cut and joined the fabric for the back of the banner too, but as that’s going to be left plain we can ignore that from now on.)

It was then stretched in a frame ready to start sewing.  I have a frame wide enough (just!) for the width of the banner fabric, but it has to be rolled onto the top and bottom bars, leaving an exposed area to stitch on, which will need to be moved as I progress.  As when it’s rolled the transfer on the back will be in contact with the fabric on the front and I don’t want to risk any rubbing off and marking it, I placed some muslin over the top before I rolled it, so if any of the transfer does rub off, it’ll do so onto that. 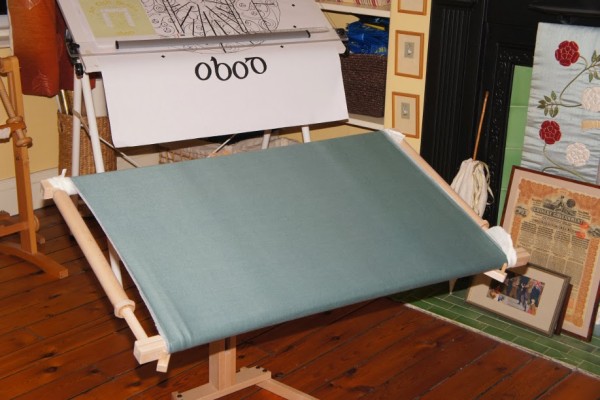 That’s a lot of preparation, but it’s all absolutely necessary to do a proper job.  Now it’s time to start sewing!