An idea for a piece of embroidery can hit you when you least expect it. One evening, I was watching a nature programme on TV when the phone rang. I paused the programme and settled down for a chat, but as I talked, I kept looking at the image on the screen.

The picture was of a little lizard, that rolled itself into a ball when it was threatened. It had curled up, and was biting its own tail. There was something about this that struck me – it somehow looked almost heraldic, and I felt that this was something I wanted to stitch.
To give me something more than just an impression to work with, I photographed the TV screen: 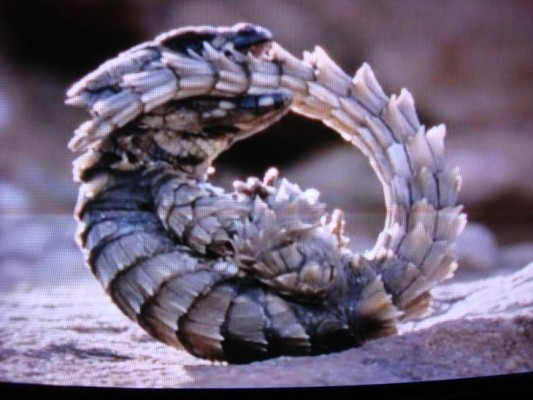 As it is, this is a bit fiddly, so I simplified and reduced the number of sections in his body, and with the aid of a compass, made him more circular. I also reversed the design from the original, as I just felt it worked better. 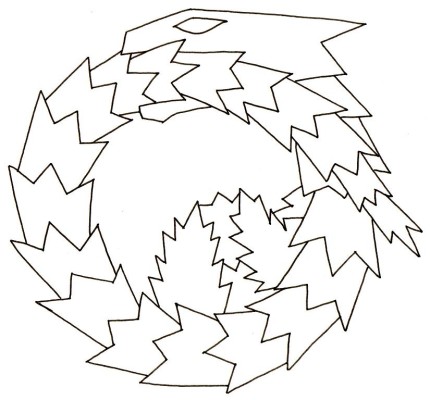 This design fits nicely into a 7″ circle, as part of a series of roundels I was working on at the time.
As it’s a bold shape, and in keeping with the heraldic feel, I wanted to use strong colours and simple but effective techniques and materials. As such, I used a black silk satin as the background, with cotton lawn onto which the design had been transferred as a foundation.
After the design had been transferred to the front with small running stitches, I appliquéd each section individually in a fine red leather, with slightly padded gold kid for the eye. Each section was then outlined with a single couched Jap gold thread, to give definition and to lift it.
Here’s the finished piece: 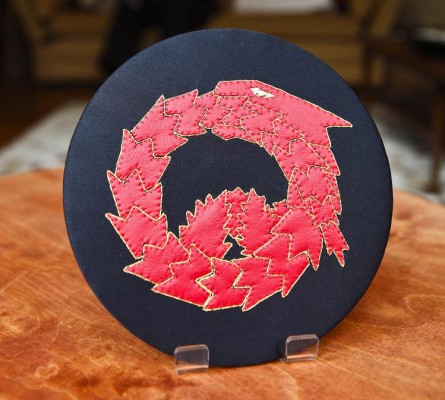 I think he looks rather fierce!
One comment on “Fire lizard”