More detailing still had to be added after the appliqué was finished; on Fiona’s design, there are some small red discs. These were coloured the same as the detail I’ve done as appliqué, which would imply working them in the same way, but I felt that I’d already reached the limits of both the technique and my patience, so something else was required.
Being round, they seemed to lend themselves to sequins, so that’s what I did, using flat red ones, rather than the shaped sort. Stitching sequins down always looks a bit messy to me, so I fastened them down with a bead in the centre. These were spaced around the edges of the legs of the cross: 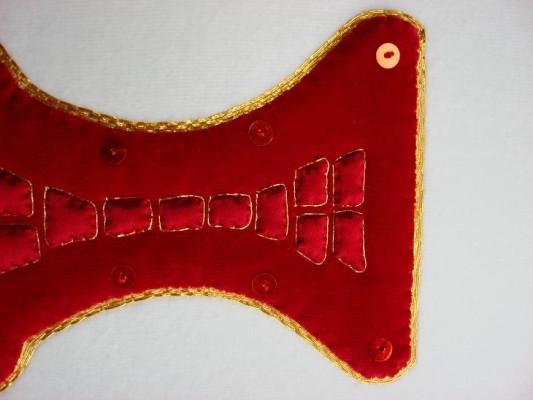 The design also called for a series of little gold triangles around the edge. Not knowing of any triangular sequins, sadly, I cut these out of gold kid leather. They’re pretty small, and I was concerned that stitching them down at the corners would both look really obvious, and run the risk of splitting the leather. So, I opted to treat them in the same way as I’d just done the sequins, and stitch them down with a bead in the centre.
As I was using seed beads, I needed a beading needle to go through them. But, a beading needle is too fine to go through leather, even a soft one like kid. To get round this, I pierced each triangle with a leather needle first. 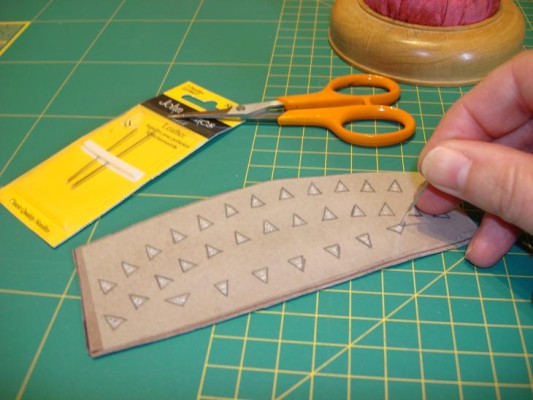 I did this before cutting them out, as it seemed less fiddly. Each triangle was pierced twice; while I could use one hole and pass the thread back down the way it came up, the kid piece would be able to spin round on this, and I wanted all of them to lie in a particular way. With two holes, I could put a proper stitch in, and keep them (more or less) pointing in the right direction. The bead is basically just to hide the stitch, but it does add a bit more sparkle. 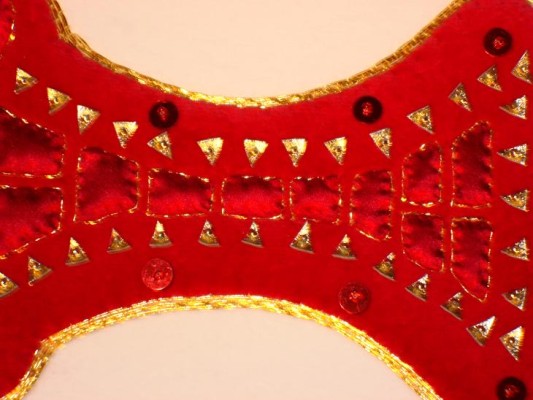 So, put them all together, and that’s the cross finished! 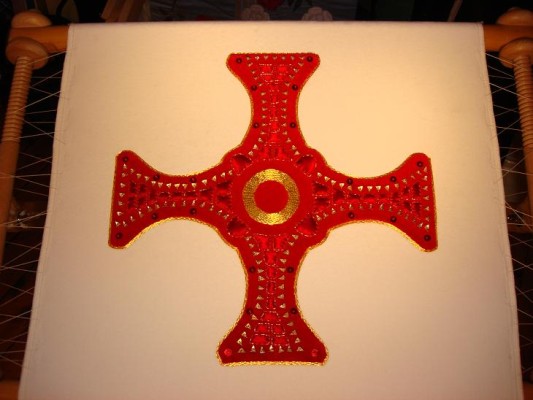 All in all, I’m quite pleased with how it’s turned out. Which is just as well, as now I’ve got to do it all again…
2 comments on “First central cross completed”