I can’t believe it’s so long since I last posted – sorry about that.  It’s summer, more or less, so I’ve been out and about, I’ve reupholstered some dining chairs, and I’ve almost finished tidying and rearranging my workroom (of which more in a future post).  What I haven’t been doing, I’m afraid, is sewing.  I do have plans, though, so I’ll get back to it soon.  You’ll be the first to know!

In the meantime, here’s the final one in the Four Elements series: Air. 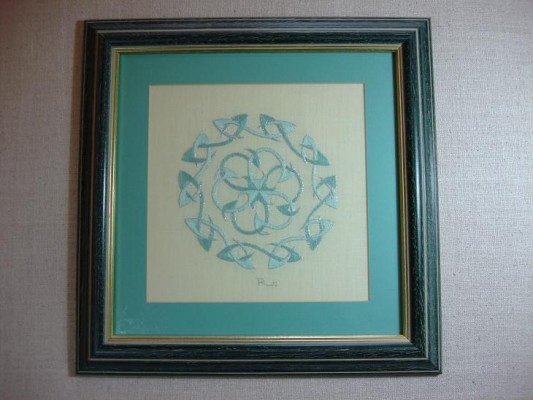 This is an original design, but I wanted it to have a Celtic feel, which I like to think it does.  As with the others, it’s outlined in chain stitch in a metallic thread, in silver in this case, and then filled in with split stitch, here in two toning shades of turquoise. 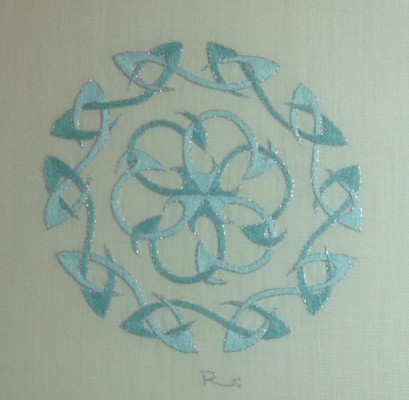 While I like this one (unlike Earth!), one thing that annoys me about it is that it’s not straight, or I suppose I should say not round.  It’s meant to be, but it must have distorted slightly on the frame, and I didn’t manage to correct it fully when pressing it and mounting it onto board.  If only I’d discovered damp stretching sooner!

Overall, I like this series.  Even with the much-maligned Earth, I like the concept behind it, I just think I could do better.  In fact, as I stitched these some time ago now, I think I could do all of them better.  Maybe I’ll do them again some time, using different techniques.  And bigger.  And not behind glass.  Panels?  Hangings?  Hmm…