Here’s the fourth in the Four Elements sequence, Earth:

Like Water, it uses a traditional Celtic motif, this time knotwork.  Also the same as Fire and Water, the outlines are in chain stitch in a metallic thread, filled in with split stitch. 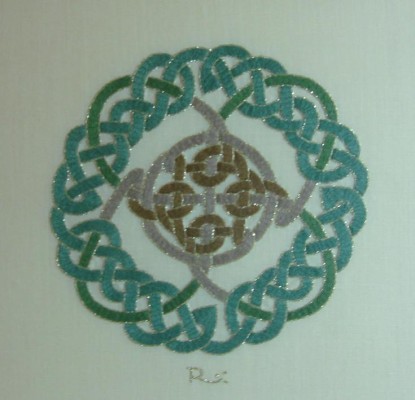 Just about everyone seems to say that this one is their favourite, and I can’t understand why: it’s my least favourite out of the four.  To me, it just doesn’t work.  I think the concept is fine, but both the design and the execution let it down.  The way the two sets of knotwork – the centre and the outer ring – link together I think is clumsy; it may work better if there were an odd number of the linking loops, probably five, rather than the four I have here, as for some reason odd numbers of things often seem more harmonious than even numbers.  Plus, the greens are slightly the wrong shade to work together, and the change from green to brown is awkward.  All in all, not one of my better efforts!

One day, I’ll do this again, I think.  I’ll start again with a new design, and this time, I’ll try and get it right!