We have a new flower! The side panels have a flower on them that the top and bottom panels don’t, the foxglove (Digitalis purpurea).  Foxgloves are most commonly purple, but a wild subspecies, D. purpurea, subsp. heywoodii, has ivory or pale yellow flowers. 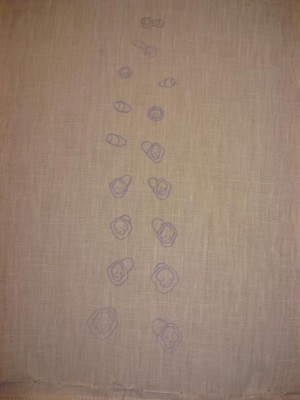 I’m not sure why I added those dots to the transfer as they’re just going to be stitched over, but never mind.  They do act as a reminder that something needs to go there!  There are a series of flower heads, which will all be attached to the same stem, with the largest flowers at the bottom and the smallest buds at the top.

As the flowers in the wild are very pale, I’m using the palest threads in my palette to stitch them. This means that they don’t show up too well against the white linen, so sorry about that, but they’ll be fine on the red velvet backing fabric.

Starting with the cups at the base of the buds, I used my palest green, Madeira stranded cotton 1409, to both outline them in buttonhole stitch and fill them in in split stitch. 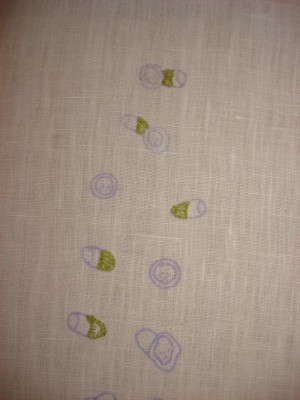 For the buds and flowers themselves, I’m using two shades, 0101, which is a pale ivory colour, and 0103, which is a very pale yellow.  I’ve used these colours before on the Banner, for the pearlworts, so using them in combination again helps keep a consistent look.  In case you’re wondering why I didn’t use 0102, while it’s a very nice colour by itself, it has rather a peachy tone, which doesn’t go at all with any of the other shades of yellow that I’ve used so far, or with the particular greens that I’m using either.  So far, with the split stitch shading, I’ve always been careful to use two colours next to each other on the shade card, to give as soft a gradation as possible; even though 0101 and 0103 (obviously) aren’t next to one another, both 0102 and 0103 differ in the depth of their shade from 0101 by a similar amount.  In other words, 0103 is just as pale as 0102, just a slightly different colour, and one I think works better.

Back to the stitching.  I used the ivory 0101 to outline the flowers, and I filled in the body of the side-on buds at the same time: 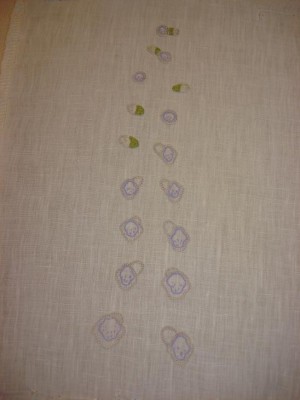 Foxglove flowers are relatively long and bell-shaped, and I want to give the impression that my flowers have an interior that you can look into.  As of course they’re actually flat, I need to try and achieve this with shading.  To start with, I defined the inner edge of the ‘bell’, with buttonhole stitch: 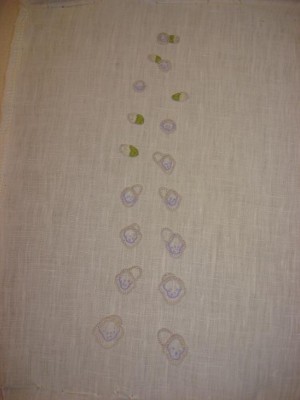 Again using 0101, I filled in the top lip of the bell, above the buttonhole-stitched ‘edge’, and also along the bottom, real, edge: 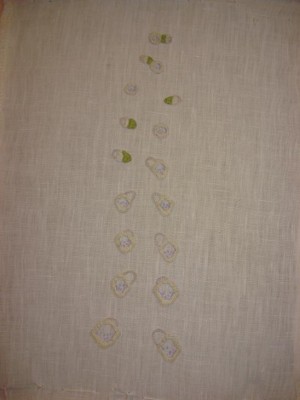 The stitches along the top are parallel to the edge of the flower, while the ones along the bottom are perpendicular to it.  This should help with the shading, and give contrast between the outside and interior of the flower.

I then used one strand of 0101 and one of 0103 to fill in the centre of the smaller circular buds, part of the interior of the bell-shaped flowers, and all of the exterior: 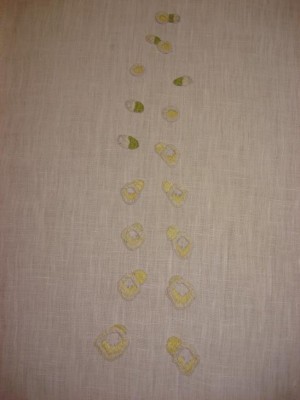 For some reason, this looks a much brighter yellow in the photo than it does in real life; it’s actually much more subdued than this.

Finally, I used two strands of 0103 to fill in the rest of the interior of the flowers. 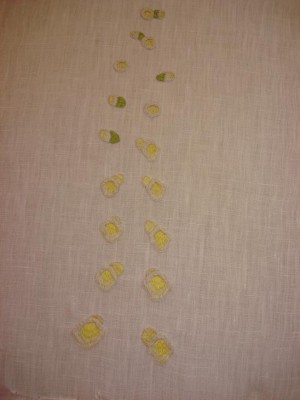 There’s still something missing, though.  Remember the dots on the transfer?  Foxgloves have small spots on their interior surface, mostly towards the rim, in a slightly darker colour to the rest, and these now needed to be added.  My first thought was to use French knots, and I started to do this, but it looked terrible, so they came out again (I should have taken a photo to show you how bad it looked, but I didn’t think of that until it was too late.  Sorry).  Instead, I added small stitches, just a millimetre or so across, in the next shade up, 0104: 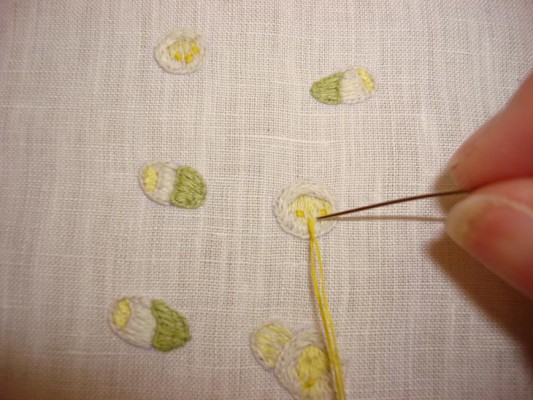 So with that done, here are all the completed foxglove flowers: 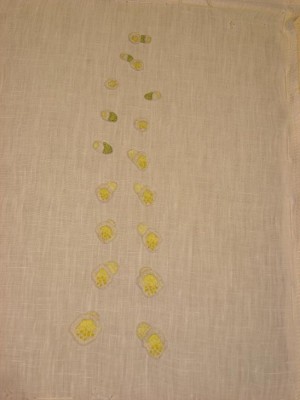 I’m very pleased with how they’ve turned out – I think they do have a sense of depth about them.  What do you think?