My sister, Kate, has a big birthday coming up in Spring 2011, and has asked me to make something for it. This might seem like a long way off, but there’s a bit of work in what I’m going to do, plus it’s to be part of a fire screen, which will also have to be made, so best to allow plenty of time.

Kate’s asked for something similar to the Moon picture I mentioned last time, but with a crow rather than a hare.
Way back in our teenage years, two LPs we listened to a lot were Phantasmagoria by The Damned and The Raven by The Stranglers. 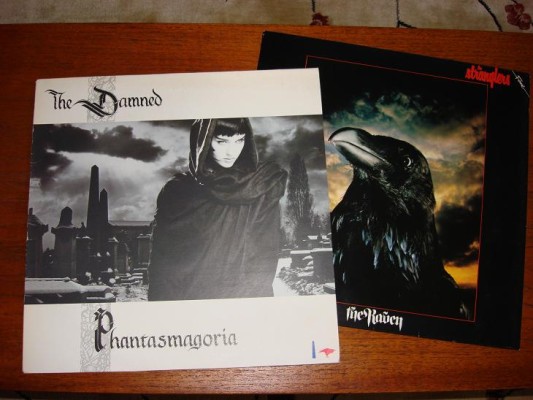 I knew there was a reason I’d kept my old vinyl records! The picture of the raven is pretty easy to spot, but if you look closely at the other cover, there’s a small pink silhouette of a bird in the bottom right corner. I’m not sure what it is, to be honest, but it could be a crow; whatever it is, I still like the moody imagery on both album covers, and would like to capture something of that atmosphere in this piece.
Similar to Moon, there is a background of Celtic spirals forming a stylised moon design. A silhouette of a crow is overlaid on this, though is this case it’s going to remain as a silhouette, with only the eye within the outline. Again, it’ll all be worked in Gütermann no. 41 silver metallic thread, on a silk matka background, but this time in black.
This is rather larger than Moon, so needed a new spiral background design. I drew a circle 26cm (a little over 10″) in diameter, then drew a basic plan of circles inside it. 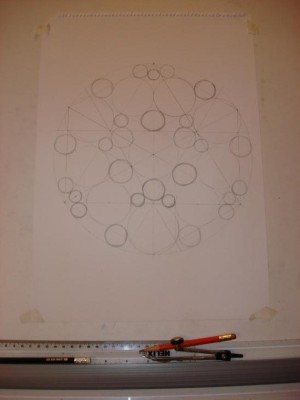 I’m not much of a sketcher – I’m always happiest drawing things with a ruler, protractor and a compass!
I then needed to add the spiral designs themselves. Two very useful sources of both inspiration and the mechanics of drawing the spirals are Celtic design: spiral patterns by Aidan Meehan and Celtic art: the methods of construction by George Bain. Both are excellent on the technicalities, though at one rather tricky point, Mr Bain does rather throw in the towel and says: “The actual completion must be by hand and eye”. Gee, thanks George! Still, he’s right – I got fed up trying to work out the geometry, and other than the construction lines and the larger circles, I drew everything else freehand. 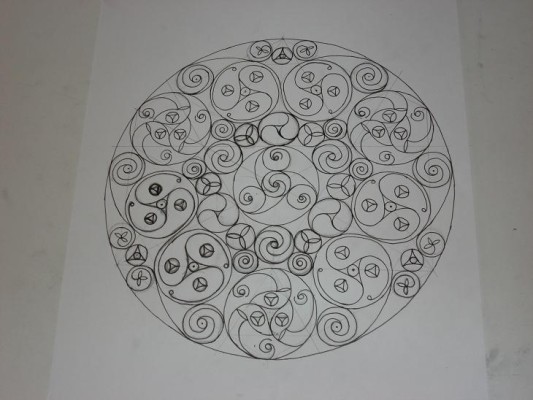 This rather scruffy drawing still shows the working out, as it were, but I’ll lose that in the final version.
Working from photographs, I also drew up the crow outline; here they are together: 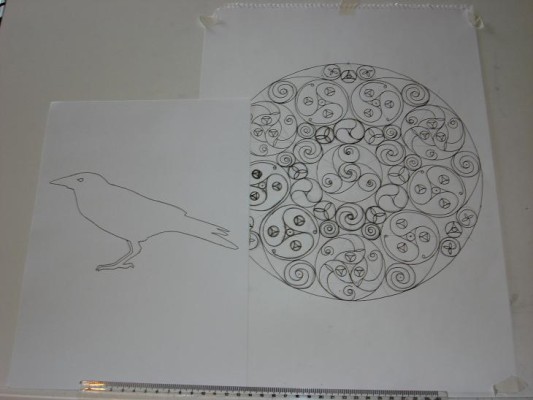 The crow’s too small here and needs to be blown up a bit, but that’s what scanners and printers are for!
The final stage was done on tracing paper: I traced the crow first, overlaid that on the spiral drawing, and traced that other than the bits falling within the crow outline.
And so we have the final design:

That should keep me busy for a while!
3 comments on “Kate’s Crow – the design”