I took a day out from sewing today and went to the UK Maker Faire in Newcastle upon Tyne, and I was very glad I did – it was fantastic!

Held simultaneously at two venues, I started at the Centre for Life.  It was busier than I expected and I had to queue for a while for a ticket, but it was worth the wait.  As you might expect, there were a lot of people making things, mostly though not all electronic: 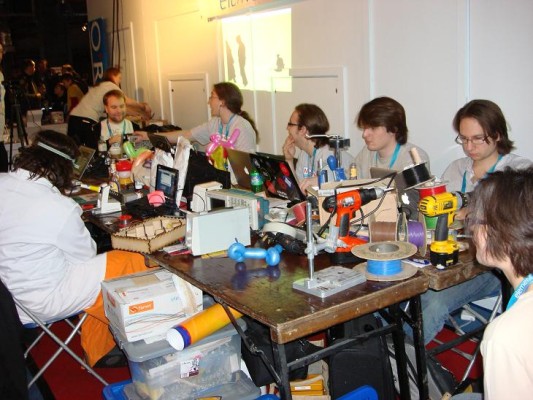 There were also a lot of stands with individuals and groups of makers, who were all very happy to talk, even though my first question was usually, ‘What’s that?’

Amongst a great deal of other stuff, there was a geodesic dome made out of estate agents’ signs: 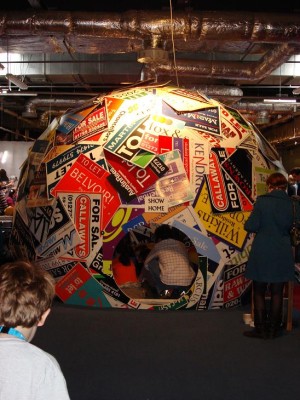 The Thing-O-Matic 3D printer, here printing out a key fob: 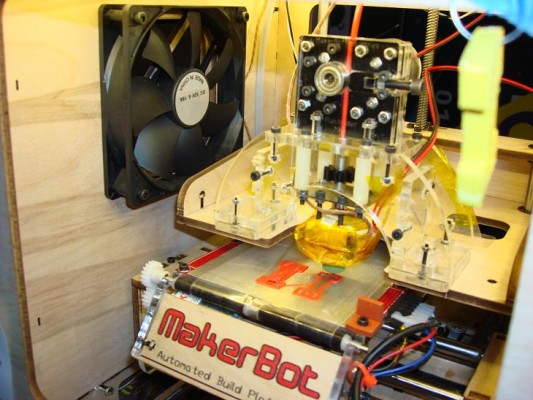 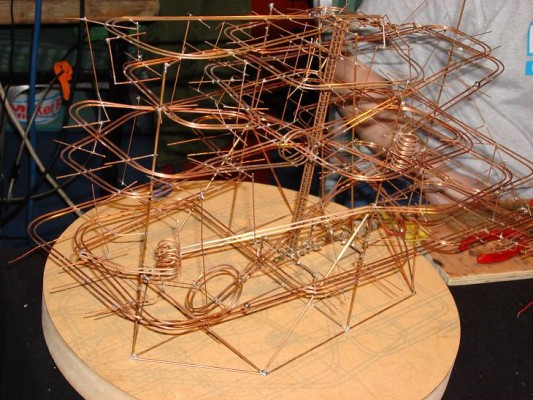 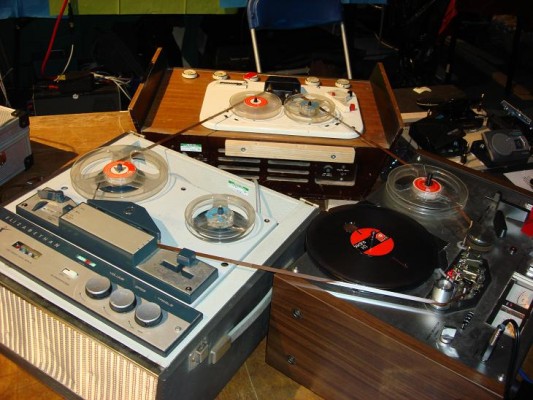 There was rather less steampunk than I’d expected, but a couple of heroic representatives: 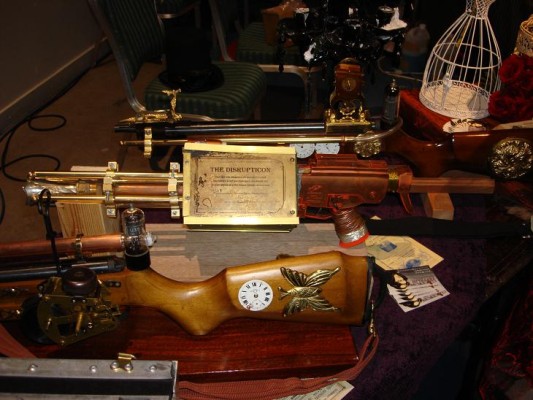 And, I was very excited to see, Tesla coils! 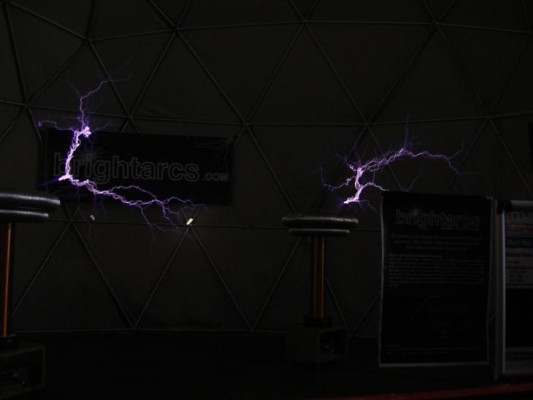 I’ve never seen these for real before, so somehow it came as a surprise that the arcs are three-dimensional – they clearly occupy a volume, rather than being in a flat plane.  I don’t know why I didn’t expect that, but I didn’t.

Outside, there was a marvellous scrap metal dragon: 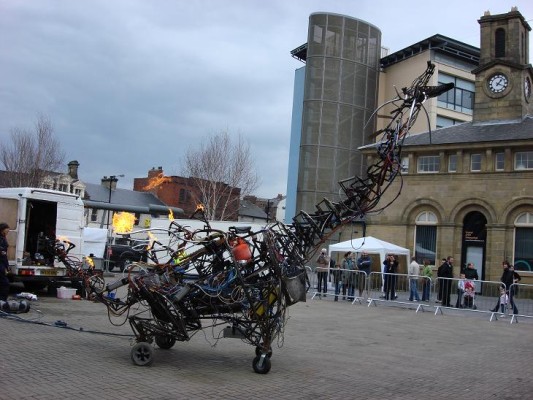 He moved his head and neck, tail and wings (which don’t show up at all here, sadly), and, thanks to the propane tanks in his chest, breathed fire: 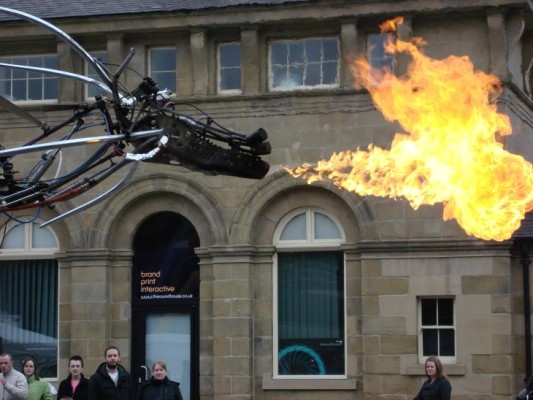 He was impressive enough for a couple of Daleks to come along for a look! 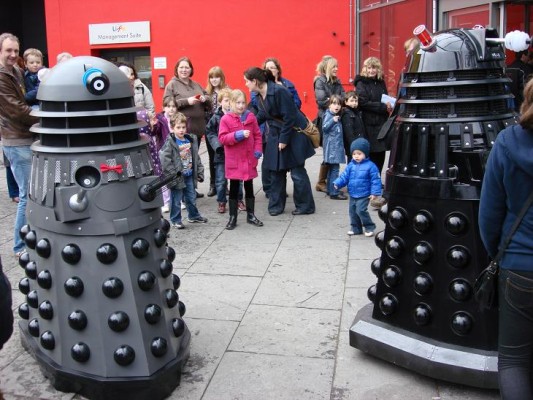 Some token textiles – someone was yarn-bombing the area, with random knitting attached to trees, lamp-posts and street signs: 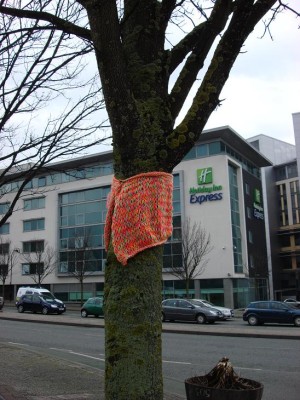 That was on the way to the second venue, the Discovery Museum.  It was absolute pandemonium – the numbers of people attending by this stage was huge – not helped by Titan the Robot doing a turn and completely blocking the entrance: 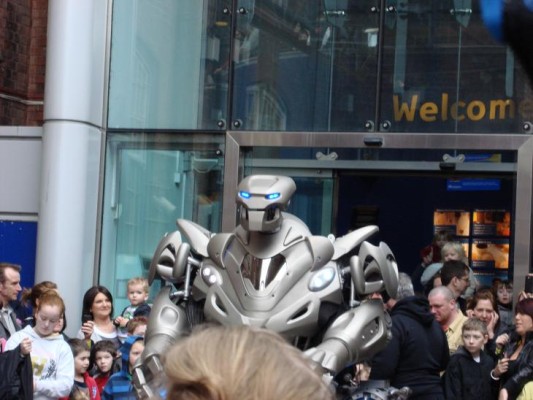 This is a terrific museum, with an emphasis on science and engineering, but which somehow has a good textile collection too.  This was not the ideal day for a proper look round, however, so I’ll just settle for a peek at the Turbinia, the first vessel to be powered by a steam turbine: 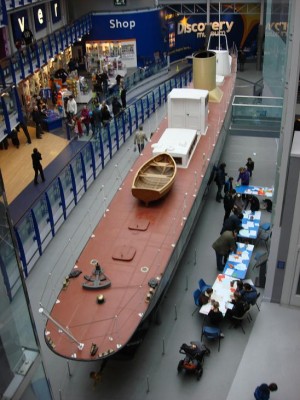 And finally, the highlight of the day: Arc Attack.  Sadly, none of my photos turned out at all well, so this really doesn’t do them justice, but what we have here is a man in a chainmail suit (a wearable Faraday cage), playing the Doctor Who theme tune with a million volts of electricity: 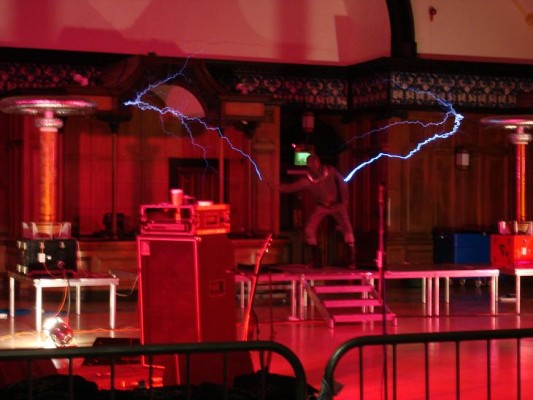 It might be hundred-year-old technology, but it was still one of the most amazing things I’ve ever seen.

The Maker Faire is on tomorrow too, so if you’re in the Newcastle area, go and have a look.