Last year’s work on the Banner meant that I couldn’t do some other projects (and a commission) that I would otherwise have done.  One of these was for the Embroiderers’ Guild North East Region’s exhibition, ‘Mining a golden seam’.

This exhibition featured contemporary goldwork (in its widest sense) embroidery and textiles inspired by the North East’s mining industry heritage and geological landscape.  I’d really wanted to be able to take time out from working on the Banner to make something for this, but unfortunately, though I did get as far as drawing up a design, time was too tight to go any further.

It’s too late for the exhibition now, but I still want to make the piece I would have made for it, so here goes!

Thinking about coal, what fascinated me about it was the fact that it’s formed from great forests, tens of millions of years ago, and I wanted to do something that reflected that.  After some thought and sketching, I drew a design of large leaves, that might have appeared in a primeval forest: 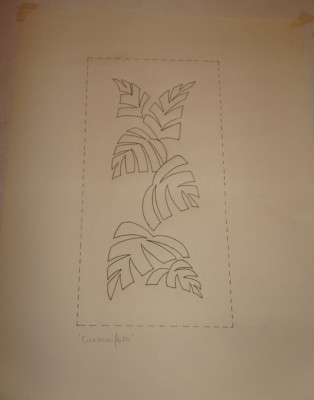 If you can read the word in pencil underneath, you’ll see that I’ve called it Carbonifera, after the Carboniferous Period, when the coal beds were laid down.

This will be in gold, as per the original brief for exhibition entries, with two colours: a dark grey for coal and a light grey for ash.

First things first, though – I need to get it set up, ready to stitch.  I made a transfer, and ironed it onto some linen that had been dyed yellow: 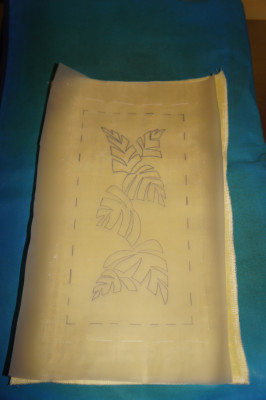 As it didn’t matter too much which way round the leaves went, I didn’t reverse the design before making the transfer, so it’s now the opposite way round to the drawing: 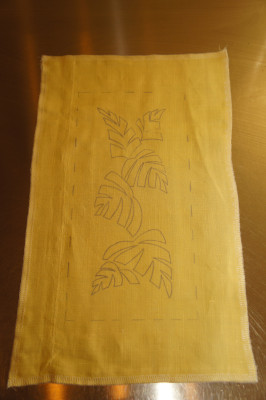 I then stretched it onto a frame, ready to start sewing: 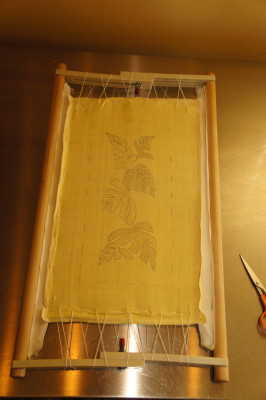 To help keep me right with the colours, I’ve filled in the leaves with coloured pencil, in more or less the final colours I’ll be using. Don’t worry, it’ll be covered up!

3 comments on “Mining a golden seam”