My new project will be similar in some ways to a picture I stitched a few years ago, so I thought I’d show you that first. 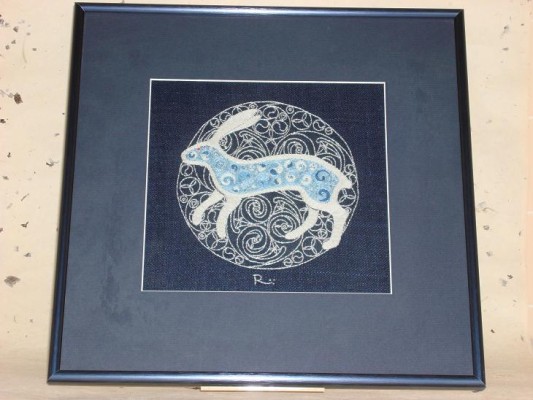 Entitled Moon, this draws on mythology from a range of cultures that associates hares with the moon, and sees the pattern of craters on the moon’s surface as a hare, in the same way as in the West we see the Man in the Moon. Speaking personally, I like the hare idea better!
The details are a bit clearer close up: 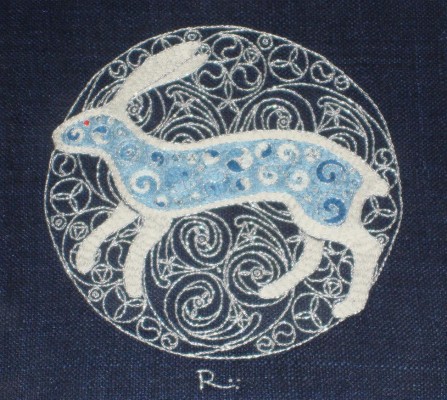 It’s entirely worked in surface embroidery: the Celtic spirals forming stylised craters are worked in chain stitch, while the hare’s body is filled in with split stitch, plus there are a few French knots dotted about. The silver thread used is Gütermann Dekor Metallic no. 41; I’ve never tried machine embroidery with this, but it’s ghastly to use for hand sewing. But, I love the effect it gives when used for chain stitch, so I use it a lot, difficult or not. The split stitch is in Madeira stranded cotton, and the design is worked on navy silk matka fabric.
Someone once told me this looked very ‘witchy’. I’m not sure what she meant by that, but I decided to take it as a compliment anyway!
One comment on “‘Moon’”