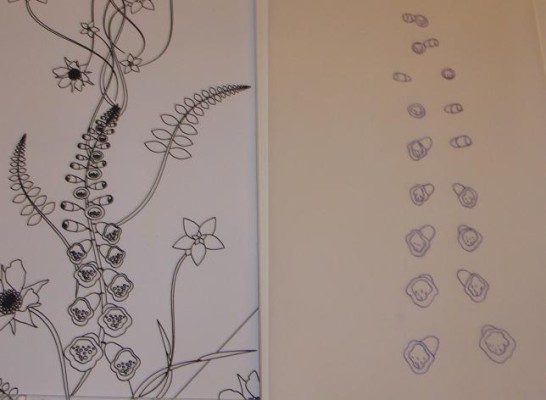 As I’ve been making transfers of the flowers on the banner design, I’ve needed to do a bit of simplification. The individual flowers and leaves that make up the foxgloves and ferns get smaller and smaller until they disappear; this works well on paper, but isn’t practical to embroider, especially as I’m planning on working the flowers on linen, cutting them out and applying them to the background fabric. So, I’ve simplified them slightly as I’ve gone along.

In the foxglove picture here, you can see the original, and my transfer. The ones lower down are the same, but after a certain point when they got too small, I did a couple joined together rather than separate left and right of the stem, and then decided to leave it at that. Any smaller, and I think it would be too awkward to be workable.
I’ve also tried to add a few differences between the flowers. All the flowers of each type are identical, though in varying sizes; I think it’ll look more natural if they vary a bit. Having said that, when I’m tracing them by hand, I don’t think I could get them all the same if I tried, so I may as well make a virtue out of it!