I’ve now finished the second (of two) sheet of foxgloves.  So for the usual before-and-after pictures, here’s the transfer, ready to be stitched: 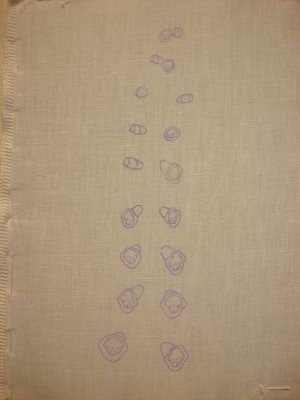 And with all the embroidery done: 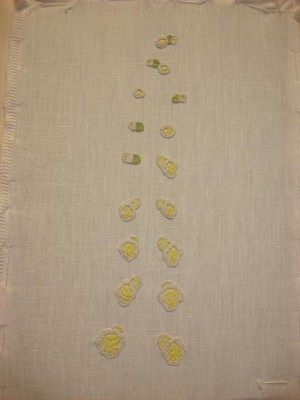 I like the foxgloves, even though they’re fiddly to do – the small flowers at the top are less than a centimetre (under half an inch) across.  I like doing them more than the ferns, for example, and I think that’s because they’re more interesting.  They’re prettier, there’s more going on in both the design and the stitching, and they look more natural.

There’ll be a couple more of them on the right-hand panel, but for now, that’s the last of the embroidery for the left one.  I’m really pleased with this – according to my schedule, I needed to get all the embroidery done by 12 March, so I’m finished three weeks early!  Putting the first panel together took me longer than I’d expected, but now I’ve made up some time I should still be able to keep on track overall, even if this one take a bit longer than anticipated too.  That’s the theory, anyway – time will tell if it works out like that.