Firstly, sorry about the delay since my last post – my laptop developed a serious fault, and has just come back from the repair man for the second time.  I hope it lasts longer than a few hours this time.

In the mean time, I’ve been getting on with the first batch of flowers.  Fiona, the designer, has kindly sent me details on all the flowers used in the Banner, and the flowers I’ve been working on are either knotted pearlwort (Sagina nodosa) or trailing St John’s-wort (Hypericum humifusum).  I think the shape of the ones I’m embroidering is more like the pearlwort, but the colours I’d already started with before I saw the pictures are more like the St John’s-wort, so they’re sort of pale yellow pearlwort.

Using the very palest shade of the threads I’ve chosen (Madeira 0101), I outlined the inner ‘star’ in the centre of each flower in buttonhole stitch.  Strictly speaking I didn’t need to as this isn’t going to be cut out and so doesn’t need the edges strengthening, but I want a consistent look and set of techniques throughout, so I think it’s worth doing. I then filled the stars in with the same thread, again in split stitch: 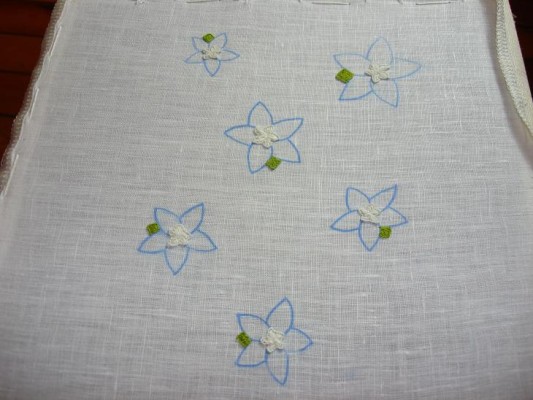 And in close up, so you can see more detail: 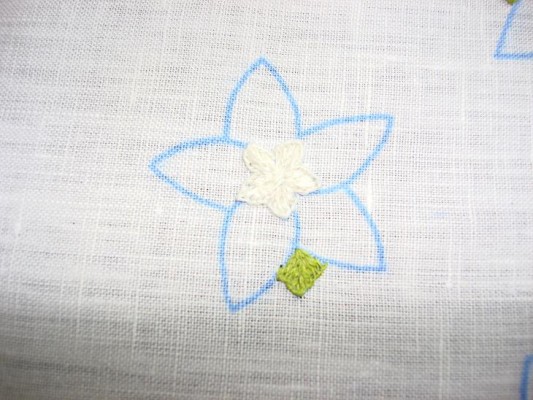 The main petals are (mostly) going to be in the next-palest thread (0103), so I outlined each petal in buttonhole stitch using that: 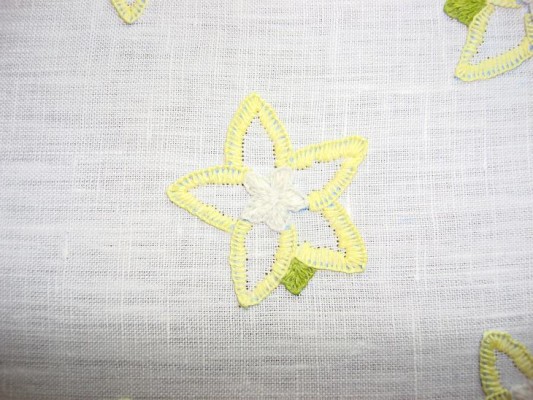 The stitches need to be close together to prevent fraying when they’re cut out, so despite the flowers being quite small (the one I’ve been using in the close-ups is about 2.5cm (1″) in diameter, and that’s the second-largest!), this is quite time-consuming.  It’s an absolutely crucial stage, though, so it’s not worth trying to cut corners or rush things.

You’ve probably also noticed that I’ve worked the buttonhole stitch along the outside of the transfer line, but that it’s showing through the ‘legs’.  This isn’t a problem, as the next stage will cover this completely.

So, here are all the flowers, with their petals outlined: 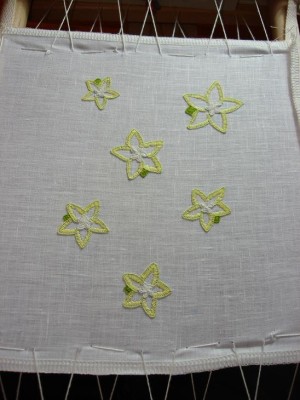