Just the very large spiral to do, then Spirograph III is finished.  The trouble is, it’s going to be as much work as all the others added together!  This final spiral is 44cm (17.5″) in diameter, which is pretty big, and only just fits on my frame with all of it visible.  To give you an idea of the scale, I’ve taken a photo of it with a 30cm (12″) ruler: 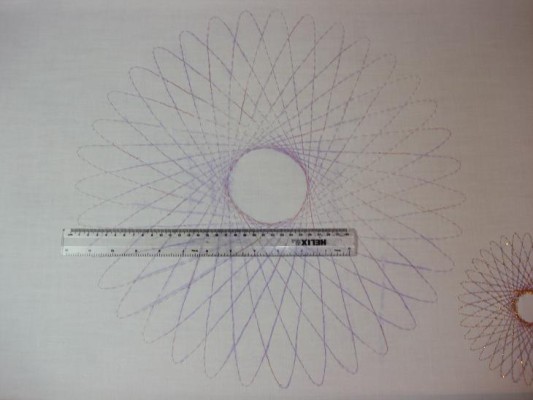 I’ve now stitched over all the design lines, to tranfer the design to the front, which you should be able to see if you peer at it.  This took quite some time in itself; for the other spirals, I’ve done them a bit at a time: stitching a section on the back then couching on the front, then repeat.  This time, as it’s much bigger and therefore less fiddly, I’ve decided to do the whole lot in one go.  That’s the theory, anyway; at least this means I won’t get myself in a knot over which way round I’m going!

Here’s a close-up of the running stitches marking out part of the design: 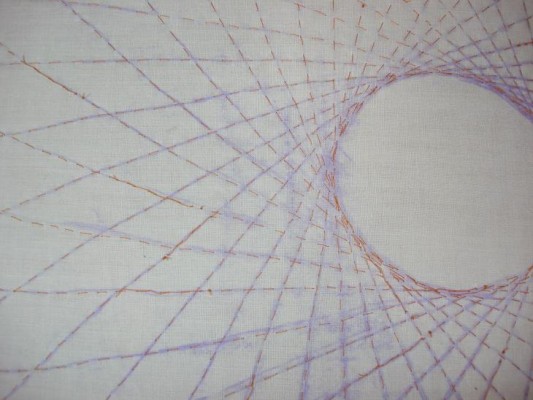 I mentioned in an earlier post that the transfer didn’t come out as well as I’d hoped in places, and I think you can see here that in some places around the centre in particular that is’s quite smudged, and as the transfer must have shifted slightly as I was ironing it on, some lines are actually double.  I went over some of the dodgy bits with a pencil, but in others I just guessed, stitching where I felt the line should go.  As all of this is on the back, when the piece is completed, none of this will ever be seen.

Here it is from the front, though it’s not that easy to make out the lines, I’m afraid: 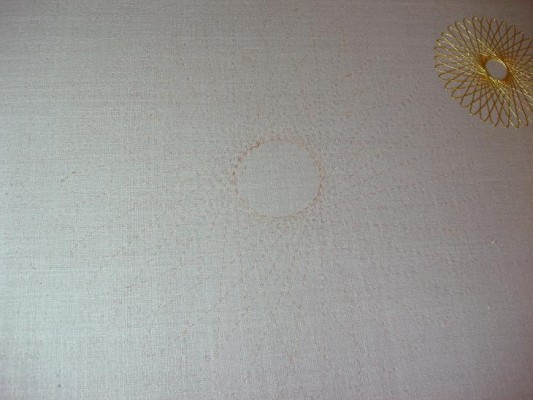 Couching over the lines with with gold thread is a simple enough process, but as there’s quite a lot of it, it’s likely to take a little time.  I’ll keep you up to date with progress.

One comment on “Spirograph III – starting the final spiral”