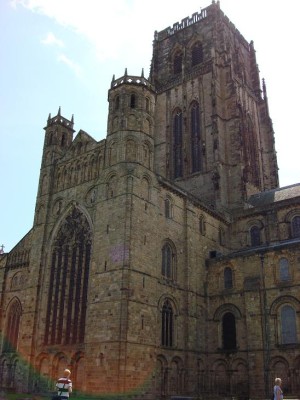 I mentioned before that I’m starting work on a big new project. I’m thirlled to be able to tell you that this is a commission from the Northumbrian Association to make a replica of a lost Medieval processional banner dedicated to St Cuthbert, for presentation to Durham Cathedral. This a major project, and I’m really excited to be involved.
There are no suviving images of the original, which didn’t survive the Reformation, but there’s a very good description in the Rites of Durham. This is a bit long, and idiosyncratically spelled, but it’s very important to the work I’m going to be doing for the next few months, so bear with me:
“The banner was a yerde brode, and five quarters deape, and the nether part of it was indented in five parts, and frenged, and maid fast withall about with read silk and gold. And also the said banner cloth was maid of read velvett, of both sydes most sumptuously imbroidered and wrought with flowers of grene silk and gold. And in the mydes of the said banner cloth was the sayde holie Relique and Corporax cloth inclosed and placed therein, which Corporax cloth was covered over with white velvett, half a yerd square every way, having a red cross of read velvett on both sides over the same holie Relique, most artificialle and cunynglye compiled and framed, being fynely finged about the edge and scirts with frenge of read silk and golde, and three Litle fyne silver bells fast to the scirts of the said banner cloth, like unto sackring bells, and, so sumptuously finished and absolutelye perfitted, was dedicated to holie Saint Cuthbert, of intent and purpose that the same which was alwaise after presented and carried to any battell, as occasion should serve; and which was never carried or showed and any battell, but, by the especiall grace of God Almightie and the mediacione of holie Saint Cuthbert, it browghte home the victorie.”
So, the important bits for me are:
As an exact replica is impossible, the new version will be an interpretation of the decription, in the style and spirit of the original. For example, there’s no description of the central cross, and it could have been very plain, a cross of St George. But, St Cuthbert is now closely associated with the gold and garnet pectoral cross found when his coffin was opened in the early 19th century, so the cross on this banner will be based on that.
A beautiful design featuring Northumbrian wayside flowers has been drawn by Fiona Raeside, and I just hope I can do it justice. Materials are now on order, so I should be getting under way soon. I intend to document everything I do for this project here, so keep checking back to see how I’m getting on.
2 comments on “St Cuthbert’s Banner”