Starting to put it together, that is, as the flowers are all embroidered.  They did need to be damp stretched, though.  Here they are, all pinned out ready to be dampened: 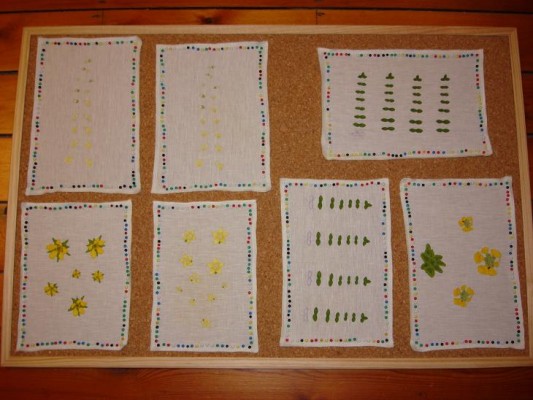 Now they’re all beautifully flat, I can cut them up.  It almost seems a shame, doesn’t it!  It’ll be worth it, though, as the finished panel (and Banner, when I get that far) should be more than the sum of its parts.

Back to the second panel, though.  It’ll form the left side of the Banner, and should look something like the design here.  As before, I’m applying the flowers by eye, but guided by a marked out grid.

For this to work, I need the grid on both the design and the panel itself.  The panel will be vertical when part of the Banner, but will be mounted horizontally on a frame to work.  To make things as simple as possible for myself, I need the design to be horizontal too.  As it’s too long for the full thing to fit on my drawing board sideways on, I cut out the panel I need and taped it to the board (don’t worry – I have another, pristine, copy put away!).  I could then draw the grid on in pencil: 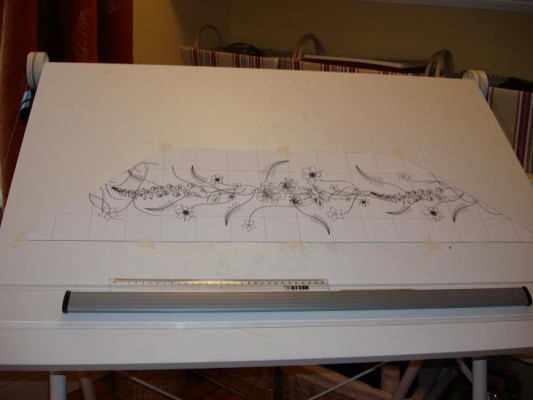 Then there was the rather tedious but absolutely vital task of mounting the velvet panel on my biggest embroidery frame.  I’d cut out and lined with linen all the velvet panels previously, when I was starting the first one, so that was one less job to do now.

The grid was already marked out on the linen on the back, so I tacked over it, to transfer it to the front of the fabric: Now I’m all ready to start adding the flowers!