Back to the beginning again, with the third panel, the right hand one this time.  First up, a sheet with all the pearlworts for this panel: 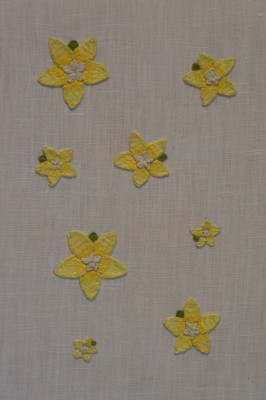 Can you spot the not-so-deliberate mistake?  If you can, you’re doing better than me, as I’d taken the linen off the frame and put it away in the cupboard before it occurred to me that I’d forgotten to do the central French knots.  Back out of the cupboard it came!

I don’t like doing French knots in the hand – they’re far easier to do with the fabric in a frame, but it didn’t seem worth mounting it back up for just a few knots, so I just did them like that anyway. 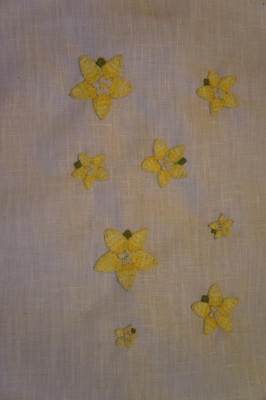 It meant the fabric now looks a bit crumpled, but that’ll be sorted out when it gets damp stretched later on.