On a whim, and with no prior experience whatsoever, I signed up for a stone carving workshop, held last Saturday at the Mushroom Works in Newcastle.  The course was on carving lettering, something I’ve always liked, and despite never having picked up a chisel before, I went along.

There were six of use on the course, taught by the endlessly patient sculptor and stone carver Peter Graham.

We each chose our stone, and then decided what we were going to do with it.  In order to be able to do something manageable we could finish in the time, there was only room for three to five letters on each piece, but that was quite enough to be getting on with!

Following Peter’s clear instructions at each stage, I traced round the stone onto a piece of paper, and cut it out, providing an exact template.  I then marked construction lines onto it, to centre the text I wanted to carve: 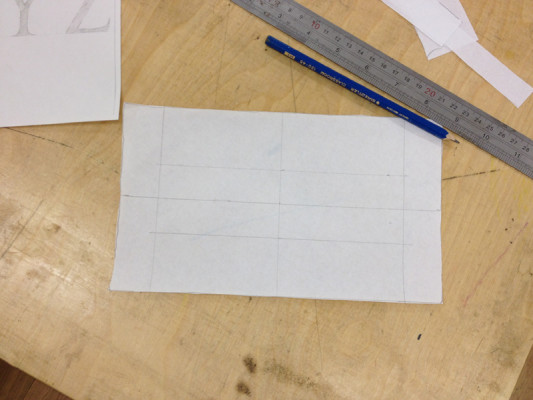 Peter provided sheets of letters to trace onto our templates; I didn’t fancy just doing my name, and so chose something else instead: 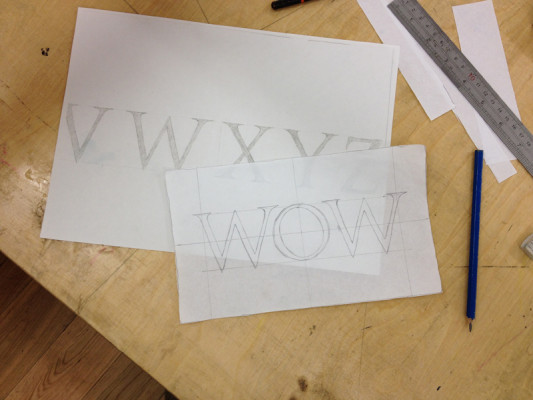 You can’t see it, but under here is the stone block: 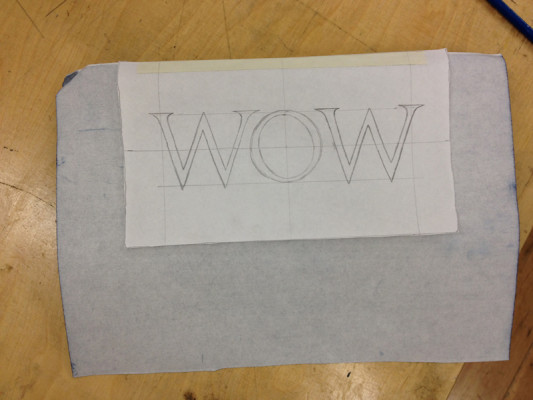 I taped the template to the top, placed a sheet of carbon paper under it, and traced the design, marking it exactly onto the stone: 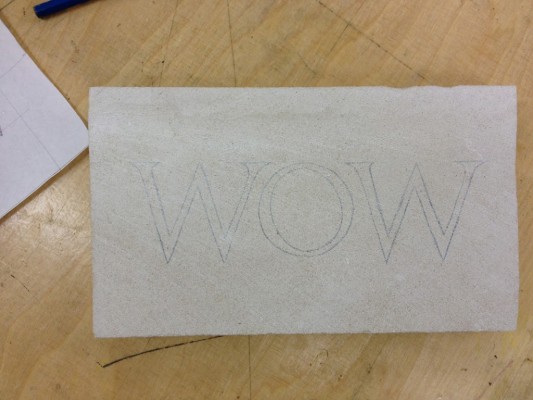 Peter gave us a demonstration of how to carve a straight line: 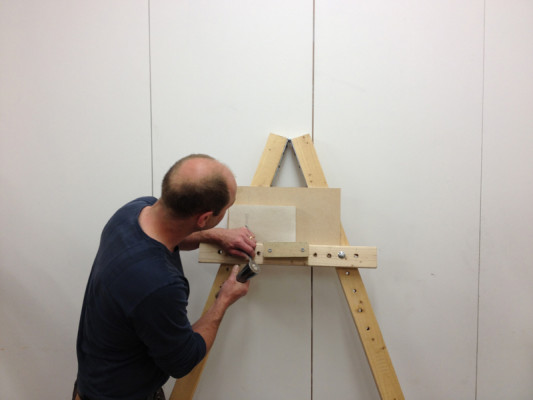 He made it look very easy, but I can assure you that it isn’t!

To practice, we started trying to carve lines on the back of our blocks: 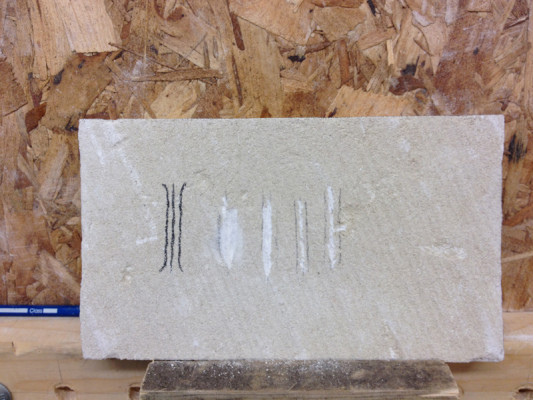 The nice neat line in the centre was done by Peter, not me!

Here I am, struggling with following a line, and gripping both the chisel and the mallet far too tightly: 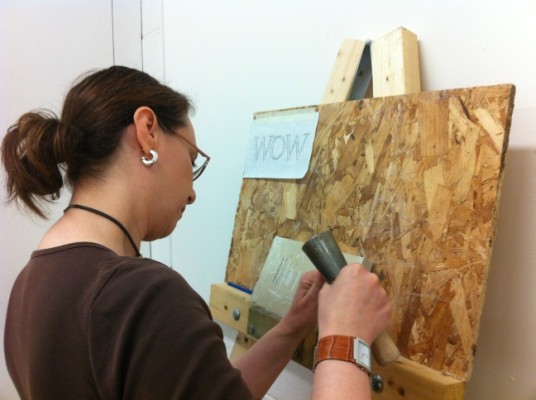 (Thanks to Nick for the photo)

I did get a bit better as the day went one, fortunately.

Finally, the time came to start on the real thing. I drew a line up the centre of the first straight section of the first letter (Peter said to start with a narrow one, which was scary), and then chiselled as fine a line as I could manage along it: 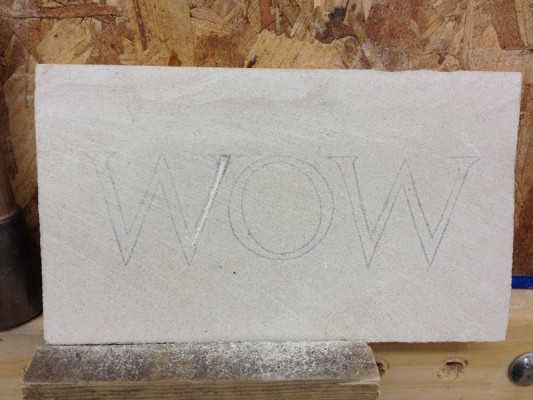 I then worked along either side of it; the idea is to chip away a bit at a time to make a ‘V’. 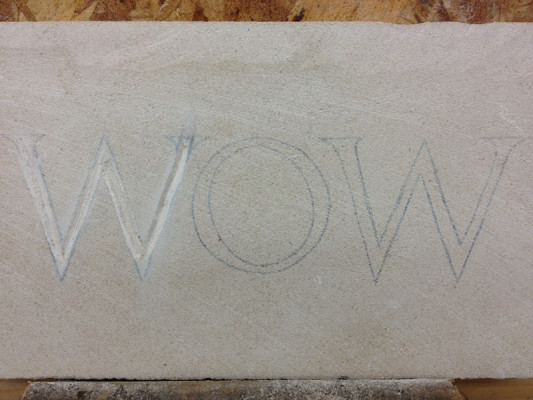 With help from Peter, I did the pointy bits: 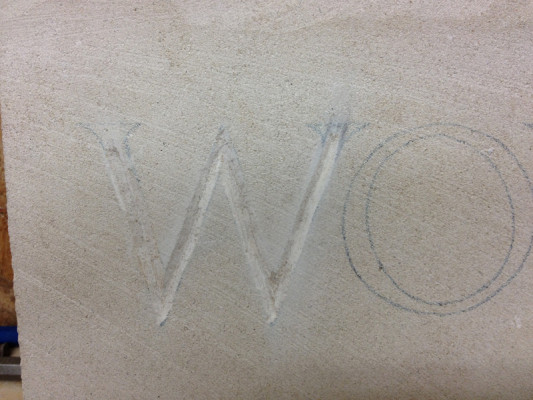 And the serifs at the top: 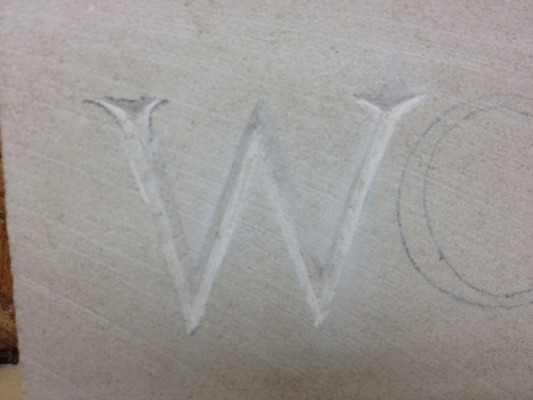 Next, the ‘O’.  A curved line follows the same principle  as a straight one, so starting with the narrowest bits of the letter: 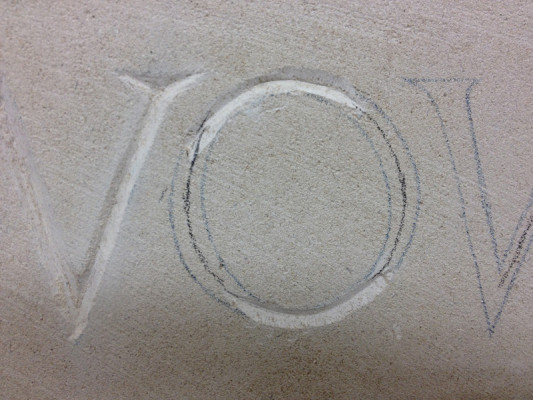 Followed by joining them up with the wider parts: 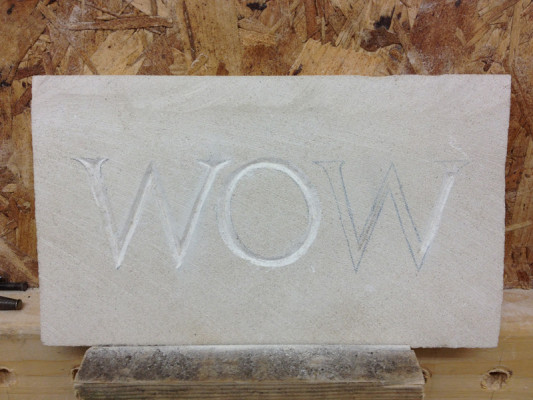 And the second ‘W’, complete with pencil marks showing the parts Peter felt I needed to tidy up: 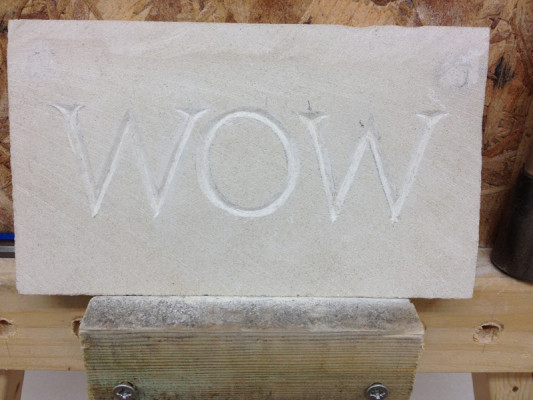 Here it is on the easel, along with the mallet and chisel: 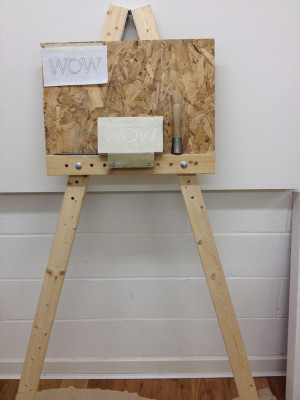 It was a bit scruffy and covered in dust, so on getting it home, I ran it under the tap to rinse it off, and rubbed it down with fine sandpaper to clean it up.  And here it is: 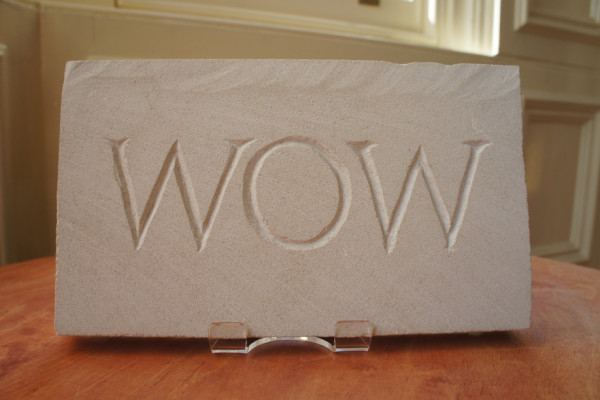 Given that I’ve never done anything like this before, I’m pretty pleased with how it’s turned out, though I think I’ll be sticking with embroidery!