Recently, Durham Cathedral, which does not normally allow photography inside, held an open evening for amateur photographers to come along and snap away. I’ve already posted about my photos of the Cathedral itself, but said at the time I’d hold back the ones of textiles for a separate post following a textile tour of the Cathedral I was booked on.  Well, the time has come!
A couple of caveats, however: the tour turned out to be of the various pieces made by the Cathedral Broderers since 1980, not all the textile collection as I’d expected, and secondly, the real treasures, including some amazingly rare Anglo-Saxon embroideries, are not currently on display due to building work, and I wouldn’t have been allowed to photograph them even if they were. I hope you can still enjoy the items I did get to see.
There is a fine display of the Broderer’s work in the Chapel of the Nine Altars. The pieces here were designed by Leonard Childs and Malcolm Lochhead, though I’m a bit unsure which of them was responsible for what, so apologies for that.
Firstly, there’s the altar dedicated to St Margaret: 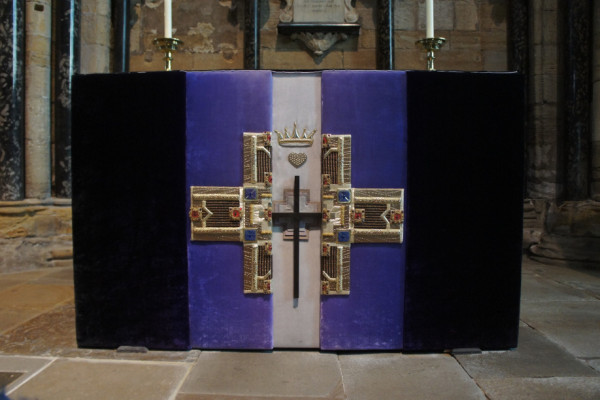 and a set of kneelers in front of it: 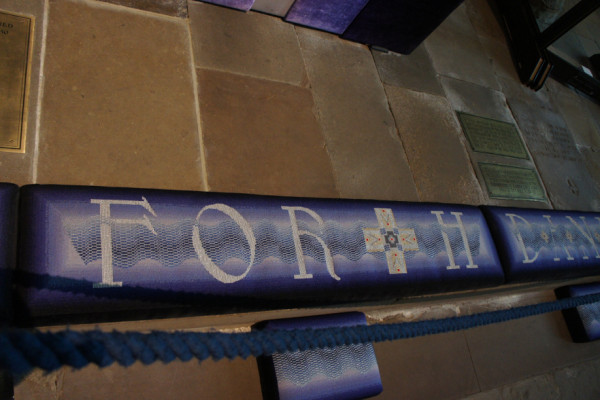 I haven’t got them all in shot, but there are three, reading ‘Wear’, ‘Forth’, and ‘Danube’ – all rivers associated with St Margaret.
Additional kneelers are with a set of pews facing the altars: 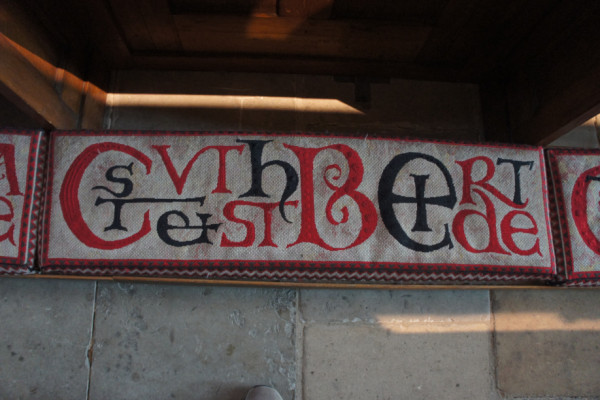 There are a whole series of them, each featuring the names of saints with altars dedicated to them in the original Nine Altars. I particularly like these as I’m always interested in lettering and calligraphy in embroidery, and I think the way the designer (Leonard Childs, I think) has incorporated the saints’ names is very effective.
Another kneeler, this time in front of an altar to St Hilda: 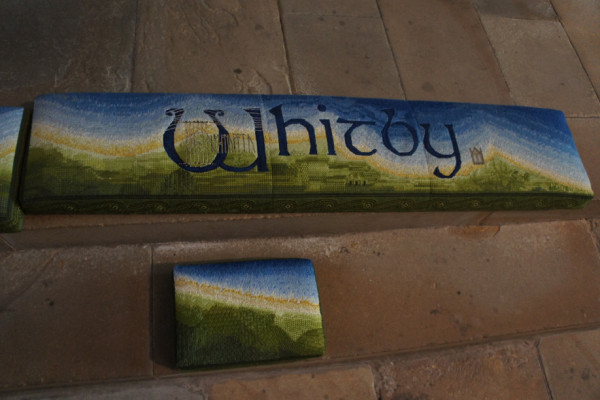 This is also part of a set of three, featuring the names of three towns – South Shields, Hartlepool and Whitby – associated with her.  The altar itself has a particularly beautiful, and deceptively simple, frontal: 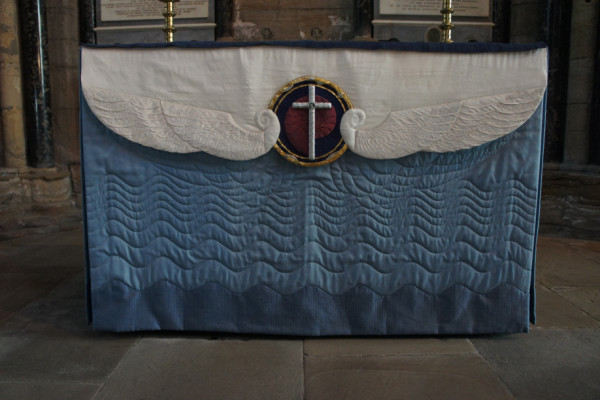 In the centre is a large altar, with a spectacular frontal and panels, featuring the wildlife of Lindisfarne: 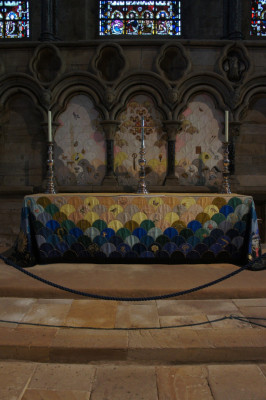 Immediately in front of the Chapel is the Shrine of St Cuthbert, which contains two large batik hangings by Thetis Blacker, of St Cuthbert: 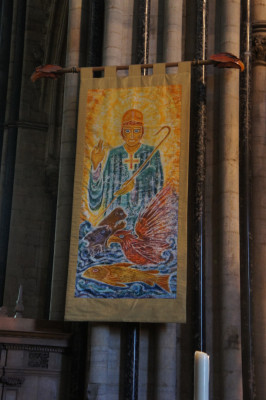 and St Oswald, whose head is buried with St Cuthbert (I’m afraid I don’t know what happened to the rest of him): 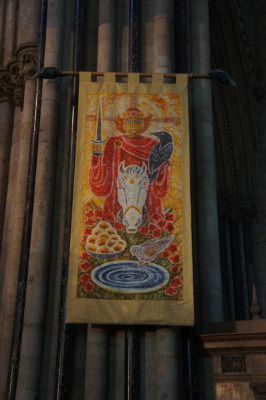 Over the steps leading into the shrine is something that might look familiar! 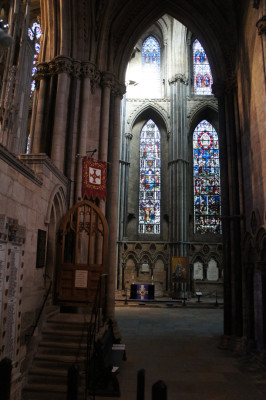 Another piece by the Broderers is a pulpit fall in the choir, with motifs based on designs from the Lindisfarne Gospels: 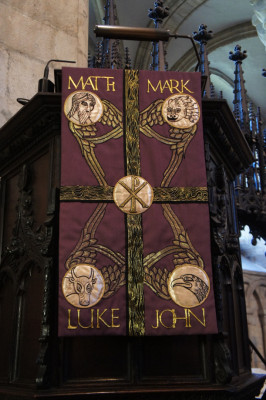 The High Altar and the other altars in the main body of the Cathedral just had plain covers at the time rather than embroidered frontals, so nothing much to see there, though there were some other interesting pieces.  None of these were made by the Broderers, however, so I’m afraid I don’t have any information on them at all.
There was a rather nice processional banner for the Mothers’ Union: 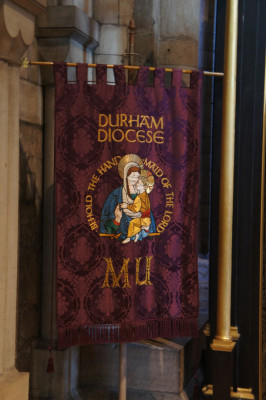 A hanging banner evidently commemorating a connection between Durham and Lesotho, in southern Africa: 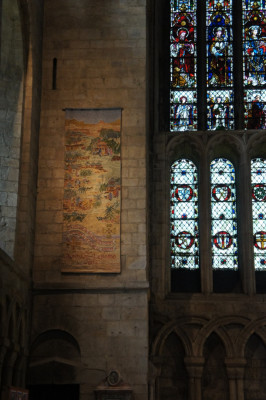 And a large processional banner, but this time entirely secular in origin: 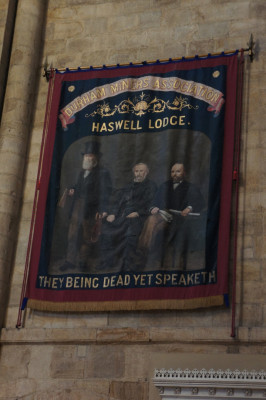 There was a long and proud coal mining tradition in North East England, and the annual Durham Miners Gala was a huge event in its heyday, with banners from each colliery paraded through the city.
Finally, into the Galilee Chapel, and a kneeler designed by Joan Freemen by the tomb of the Venerable Bede, also based on the Lindisfarne Gospels: 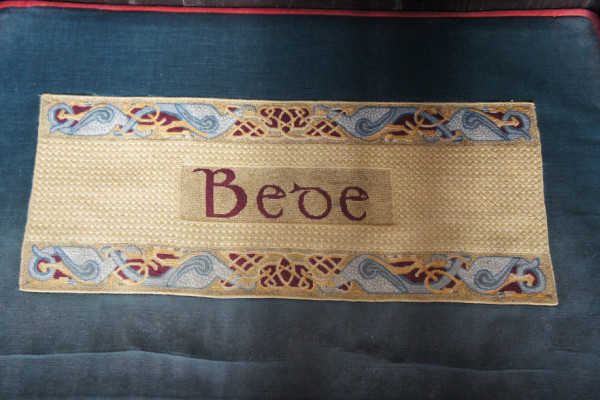 And an old and beautiful altar frontal in silk: 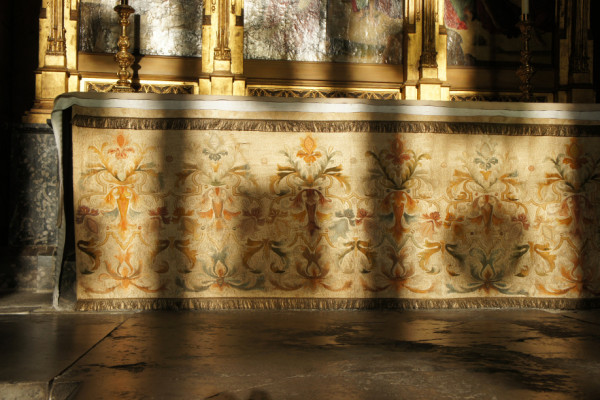 I don’t have any information on this at all, I’m afraid, but it’s just stunning.
If you’re ever in the North East of England I can heartily recommend a visit to Durham Cathedral – it’s well worth it.
2 comments on “Textiles in Durham Cathedral”