As with the second panel, there are nine ferns to embroider, and here are five of them: 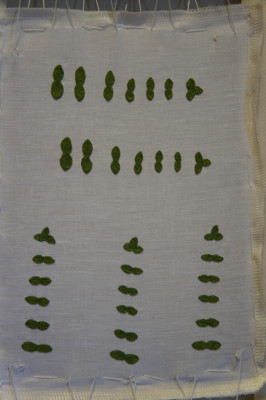 They look fine when they’re applied to the velvet and nicely edged with gold, but (and I think I’ve mentioned this before, about a dozen times) they’re a pain to do.  They’re small and fiddly and, frankly, a bit boring.  So, it’s best to get them over with, I suppose, and now I’m over half way through them.

You might have noticed that two of them, with seven leaves each, are bigger than the others, with six.  Amazingly, this is deliberate.  I may be speaking too soon, but I think I’ve finally got the hang of them; on the very similar second panel (and on the design), two of the ferns are bigger than the rest, so here I’ve stitched an extra leaf each.  This also means that the four remaining ones are all six-leaf ones, so that’s good!