Time for a new project! I’m still keen on the tambour beading idea, so I’m starting a proper project using it, rather than just experiments and practice pieces. Tambour beading is commonly used to embellish (very expensive) clothing, but my dressmaking skills aren’t good enough for that, so I’m tackling something a bit simpler: a parasol.

I recovered an antique parasol a few years ago and thought I would do the same this time, but couldn’t find one I liked at a price I was willing to pay, so instead bought a new uncovered frame from Etsy. This came with some instructions but not dimensions or a pattern that would actually fit, so I had to make my own; I didn’t want to put a lot of work into this and find I’d got it wrong, so the first step was to make a toile in calico: 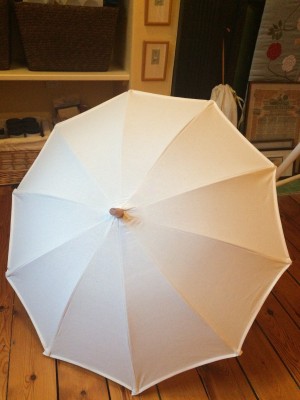 It has 10 panels, and they’re all going to be different, though similar: a design of red hibiscus and yellow lilies, plus some rather generic leaves and a band tying all the panels together. This will be worked on ivory silk organza, which later on will be lined with another fabric (I haven’t quite decided what yet).

Transferring the design for the first panel was a bit of an experiment in itself: I’ve used transfer pencils a lot over the years, but recently bought a set of coloured transfer pens: 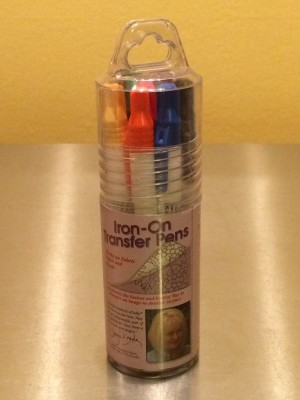 I’ve only used these on a scrap of test fabric before now, never for a real project, but I was keen on trying them as I’ve always had problems with fabric shifting when I try and trace a design directly onto it, and though this might be a better way. Transfer pencils need a very hot iron, far too hot for silk, but my tests with the pens had shown good results with a cooler iron, so I thought I might get away with it.

I made sure to test this theory on a scrap of the silk first, and I’m happy to say it was fine, so I traced the first panel design with the pens: 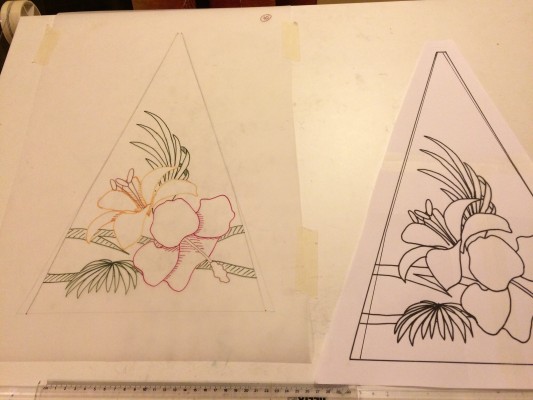 Transfer for the first parasol panel

then tacked the transfer, drawing side down, onto the fabric (with an old linen tea towel underneath it as the transfer pen came through the fine fabric and would otherwise have left a nice flower design on my ironing board!)

It worked very nicely, giving a good sharp design to follow on the silk. Here it is, stretched onto a frame, ready to go: 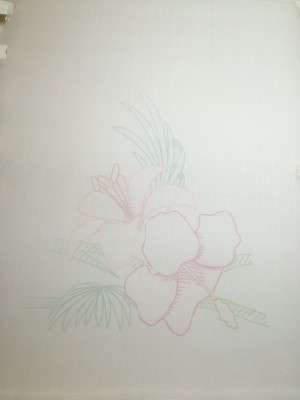 This is actually the other side from where the design was ironed on, as this will be the front when the beads are added, but is the back when I’m working, so I wanted the lines most clearly marked on the side I’ll be seeing as I go; it also means that as the ironed-on design is the reverse of the traced one, as it’s on the back of the fabric it ends up the right way round on the front. That does make sense in practice, honestly!

So, that’s all set up and ready to go – next time, I’ll have made a start.